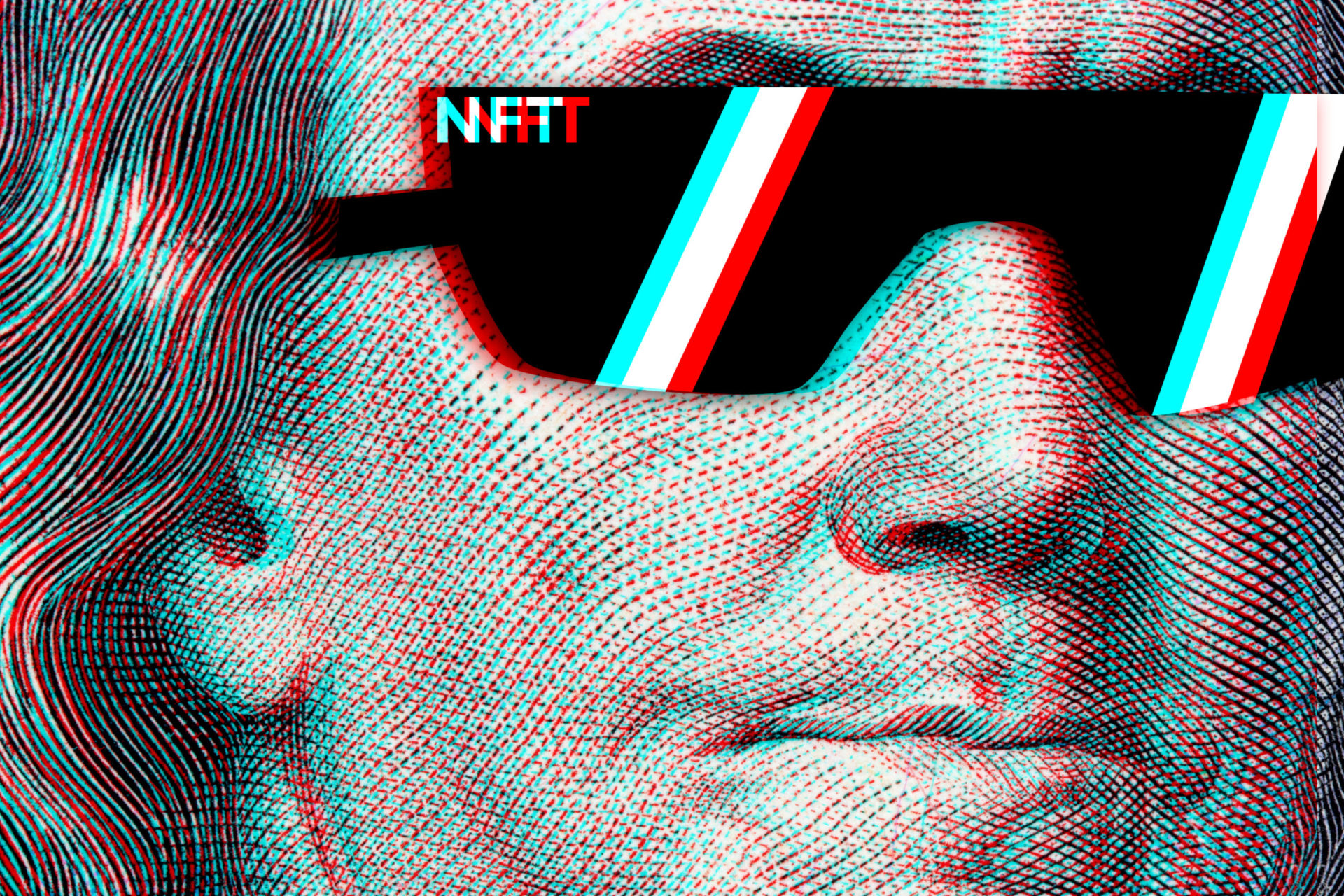 A Brief History of NFTs

A brief history of… what? You might have asked yourself. If so, here’s the lowdown: an NFT (short for Non-Fungible Token) is a unique digital file that can be bought and sold on various marketplaces for crypto or even actual currency.

NFTs come in a variety of file types, including:

… and more. How much an NFT goes for is entirely dictated by the market; essentially the same situation as physical pieces of art.

Okay, now we’ve got what they are out of the way, let’s get into the history of NFTs broken down by time periods. 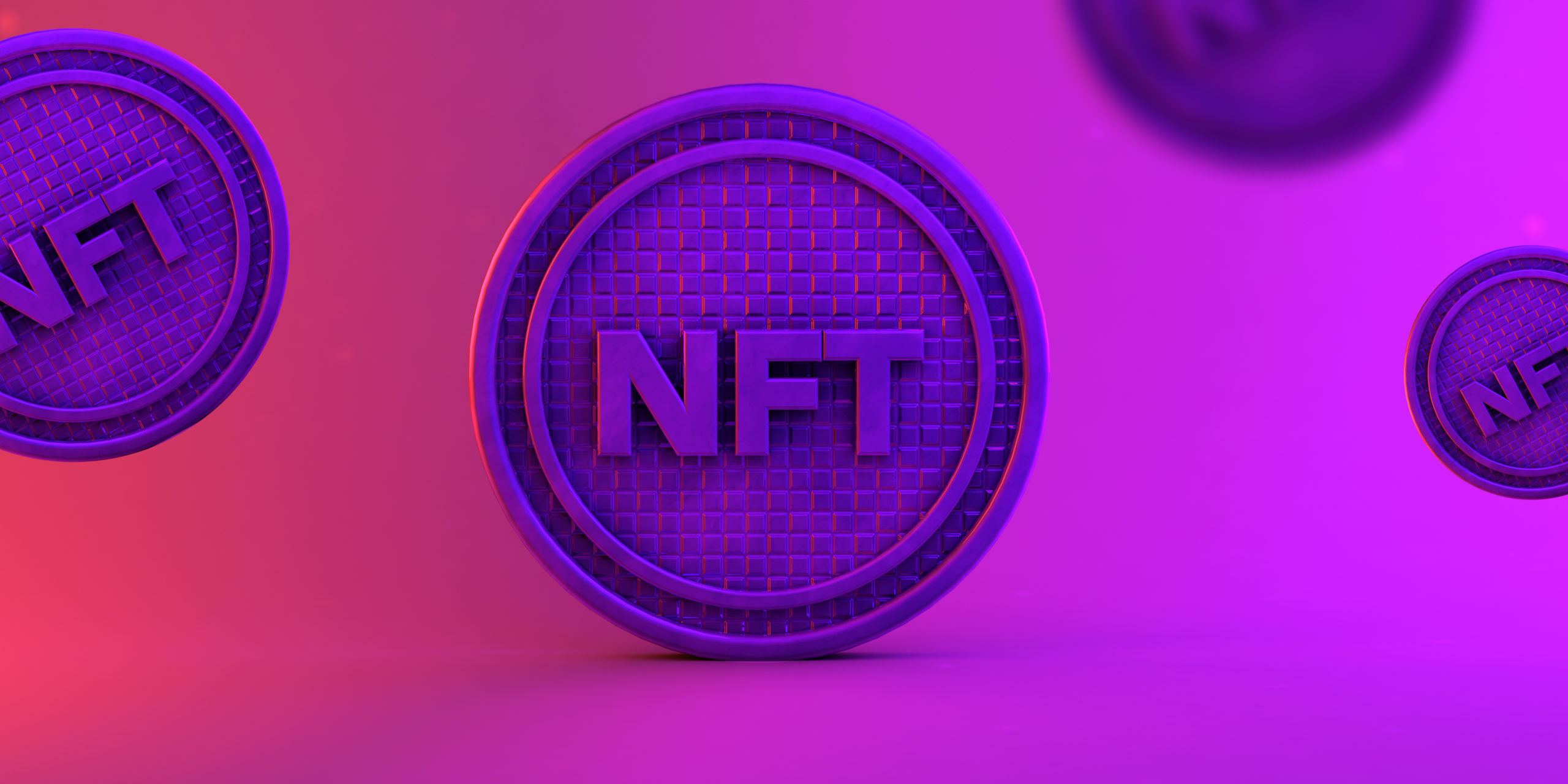 The core essence of NFTs originated way back in 2012-2013 when what were called ‘colored coins’ were first issued on the Bitcoin (BTC) blockchain.

Colored coins, which are made of very small denominations (even satoshi – the smallest BTC unit) act as digital tokens to represent real-life ownership of an asset including real estate, cars, and company shares.

The only issue with these new digital tokens was that everyone had to be in agreement in terms of how much they were worth and if even one person disagreed, the system essentially fell apart.

However, it can most certainly be said that Colored Coins were a vital stepping stone for NFTs.

With Colored Coins uncovering the possibilities of being able to issue and prove asset ownership on a blockchain but BTC at the time being unable to support this new feature, an alternative method of exchange.

Hence the creation of Counterparty, an open-source peer-to-peer financial platform built by Evan Wagner, Robert Darmody and Adam Krellenstein for the BTC blockchain. Counterparty successfully enabled asset creation on a decentralised exchange which allowed people to create their own assets as well as trade memes.

2015: Spells of Genesis on Counterparty 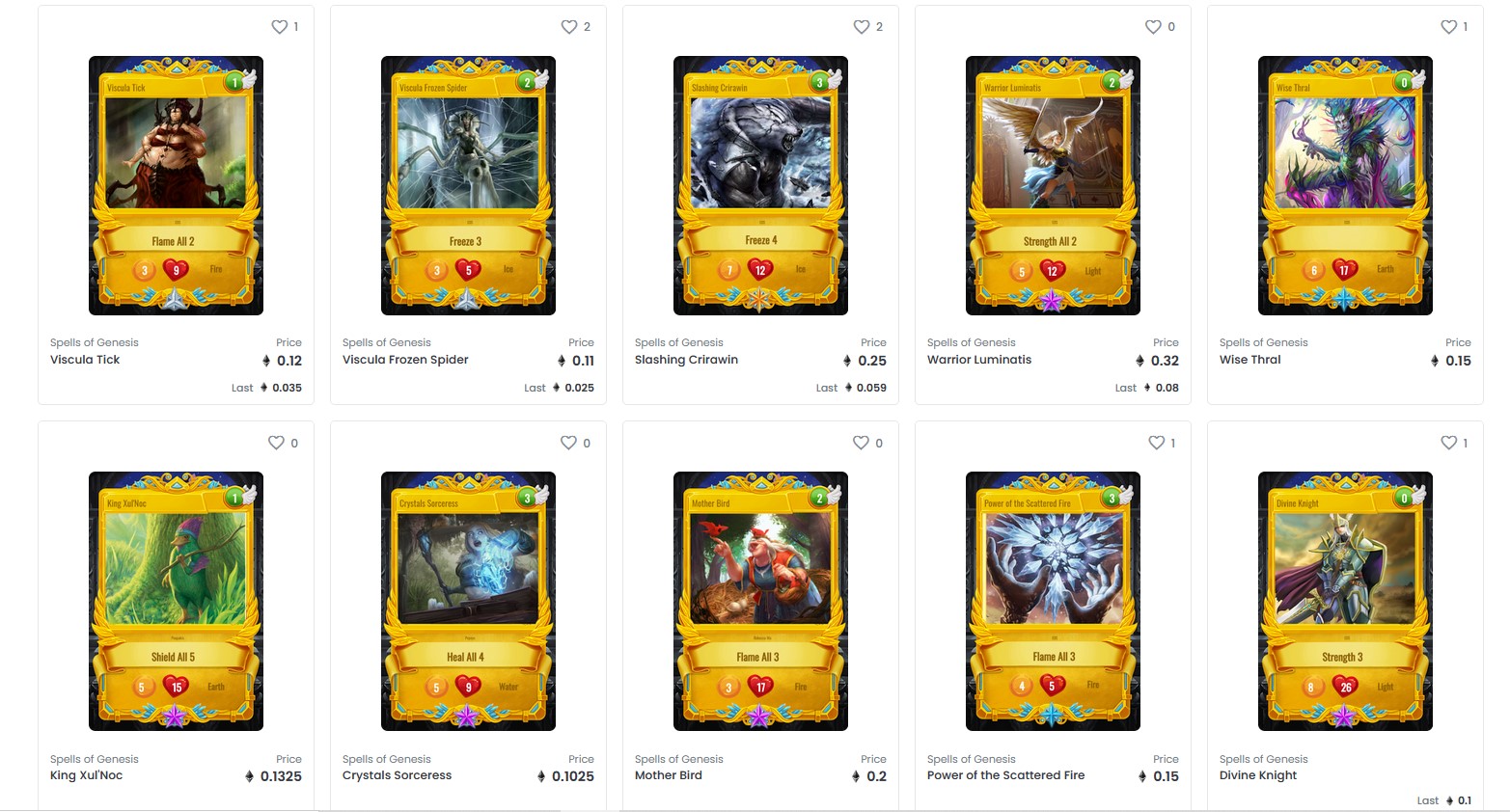 Early 2015 saw the partnership between the game developers of Spells of Genesis and Counterparty to create the very first blockchain-based mobile game ever. In-game assets were available on Counterparty and the Spells of Genesis creators even helped further the development of Counterparty with funding by offering BitCrystals, their own token which could be used as in-game currency. 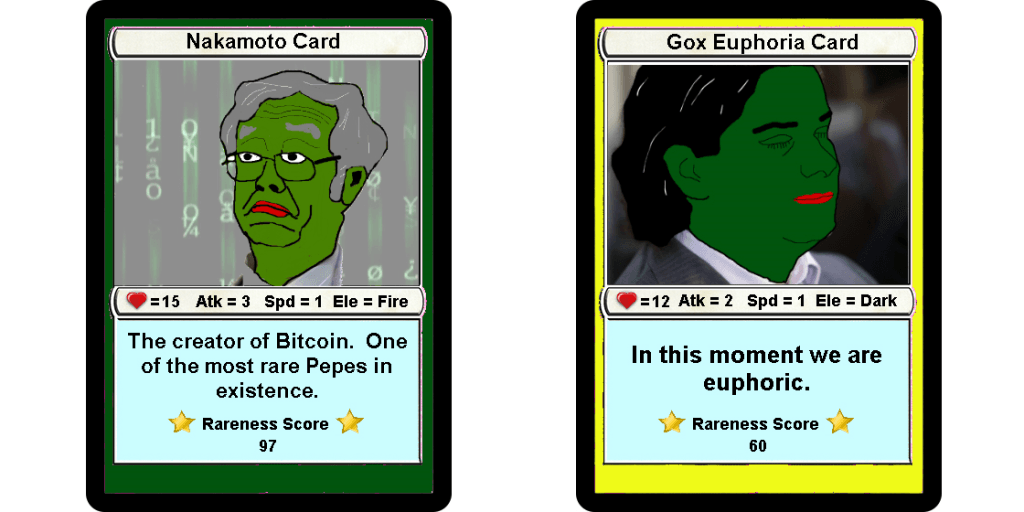 In the middle of 2016 Counterparty saw another team-up with the highly popular trading card game Force of Will, successfully launching their cards on the Counterparty platform. The uptake of these digital card purchases gave a clear indication of the potential value of these kinds of assets onto a blockchain.

By late October in the same year, memes began spreading across Counterparty – more specifically, Rare Pepe memes. This meme type has a… rather intense fanbase, to say the least. And their intense trading on the platform showed that there was a high interest in ownership of unique digital assets.

The first quarter of 2017 was Ethereum’s (ETH) surge in popularity, and with it the introduction of meme trading. Back to Pepes, in March Peperium was launched as a “… decentralized meme marketplace and trading card game (TCG) that allowed anyone to create memes that live eternally on IPFS and Ethereum.”

Mid-year in June, a couple of ‘creative technologists’, Matt Hall and John Watkinson, decided to develop their very own NFT project on the ETH blockchain which they called Cryptopunks. Creating 10,000 characters in total – no more – with each being 100% unique, these were given away free of charge to anyone who had an Ethereum wallet. As you might imagine, every Cryptopunk was snatched up quick-smart and there began a marketplace where people were buying and selling them.

Cryptokitties, a blockchain-based game where players can adopt, care for and trade (some were going for up to $100k) virtual cats, can be seen as the conduit to NFTs achieving mainstream popularity. Launched in October 2017 by a company called Axiom Zen, it was soon picked up by news outlets all over the world and quickly became one of the hottest trending news items going around.

Off the back of the success of Cryptokitties, Axiom Zen created Dapper Labs, a company that develops blockchain-based experiences including games which received $15 million in funding from Google Ventures and other top investors.

Due to the serious activity that the Cryptokitties community experienced, the prices some of the cats were being sold for and huge cash injection to Dapper Labs, the momentum of NFTs really started to get going.

The best way to describe the period between 2018 and 2021 for NFTs is that it started as a small-ish snowball at the top of a hill and, while rolling down, became bigger and bigger. You’ve no doubt seen this scenario happen in cartoons, right?

Indeed, NFTs slowly but surely gained more and more traction after the success of not just Cryptokitties and Dapper Labs, but also due to the $1 million sale of (admittedly incredible) CryptoArt piece The Fever Rose created by artist Kevin Abosch and sold for charity.

These days, it seems as though more platforms are emerging every week. Because of its highly efficient nature with the transferring of assets, it’s easy to understand why too. NFTs have rapidly become one of the most popular trends online, and show zero signs of slowing down.

And because the artists who are selling their wares as NFTs through these platforms don’t have to fork out a huge percentage of the sale to art brokers, streaming services and other middlemen, it’s the artists that are benefiting. Which is definitely something we can get behind!

Speak with us today about how NFTs can benefit your business

Understanding where something originated is a great way to realise its potential, and if like us you see just how much potential NFTs have – especially in a business setting – it’s time to get in touch with us.

At Mooning, we have a huge amount of experience working with brands just like yours to incorporate NFTs into their marketing strategy and see exponential success as a result. Give our friendly team a call today on 1300 818 435 or send us an online enquiry and we’ll be in touch as soon as possible.

What Is the Difference Between GALA and Other Cryptos? Discover what it’s like to Work in the Bustling World of Web3! How to Create an NFT marketing campaign that gets results
RETURN TO
LEARNING CENTRE
What is an NFT marketplace?
What is an NFT and how do I buy one?